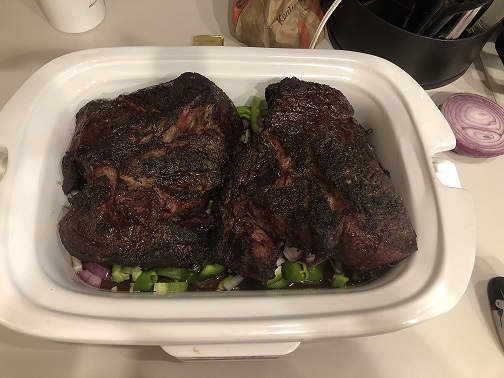 I enjoyed making this sandwich. On a scale of making the sandwich I’d give this a 10 out of 10. As for eating I’d give it an 8 out of 10.For the preparation I used this recipe as the base: http://www.thewolfepit.com/2009/10/pepper-stout-beef.htmlI used a two pack of chuck roasts from Sam’s Club – totaling 6lbs. I also substituted 2 anaheim peppers and 1 habanero both from my garden in place of the jalapenos. For the stout I subbed in root beer. I was going for a darker rootbeer with a bolder flavor. I used pre-minced garlic in place of mincing my own. I omitted the Worcestershire Sauce.I covered the top and bottom of each roast with kosher salt and black pepper.I smoked both roasts outside in my cinder block smoker for three hours using hickory wood up until the internal temp was 165.While the roasts were smoking – I prepared the goodness inside for the crock-pot. I put in the minced garlic, sliced the bell peppers, onions, and peppers, then placed all that goodness in the crock-pot. I also poured in the root beer. 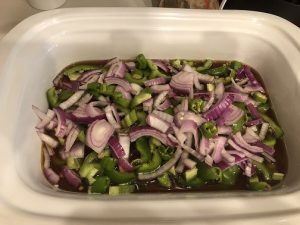 Once the roasts were to 165 I brought them in and set them in the crock-pot with all the goodness waiting. Put the lid on and set the temp to high and let them cook for a few more hours. 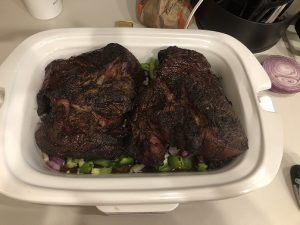 A couple of thoughts on things I’d do differently next time. I wouldn’t change the smoking process – that went great. The composition of veggies was great too. I might consider cooking the veggies at the end of the finishing process to keep them more substantive. Cooking them the way the recipe says turns them into mush. But they do add a good flavor…and the spiciness was great too – but not overbearing. The other issue I had was with the liquid from cooking. Even though I drained the meat there was juice that left the hamburger bun mushy. I wonder if a harder roll would take the juice better. Perhaps I’ll finish the meat in the crock-pot and then either leave the veggies raw or dice them and make a picante to go on top of the meat. Either way…the left overs are in the freezer and will be a great quick cook-pot dinner in the near future.